I thought I'd have everything together for Saturday but boy was I wrong :/ These past two weeks I've spent 10+ hours working on getting this demo together while also being at work and I've been having different issues with programming unfortunately.
Since the Kickstarter ended I've put in 100+ hours into Skate & Date which can be seen below. 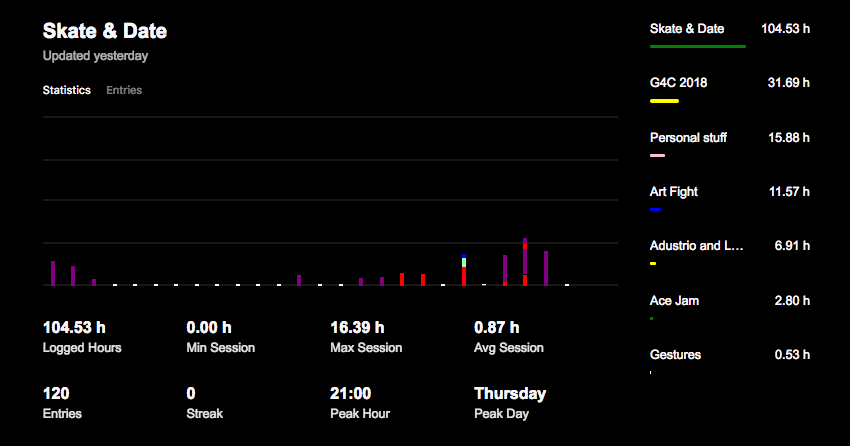 I've been addicted using this neat thing called Log! It's super neat for being organized and keeping track of things.
The purple bars there represent the all the programming I've done the past several days while red is for art, blue is for music and light green is for writing.

So yesterday I showed an altered version of the demo that's live on itch.io ( it just had a different font and had icons when characters were talking.) And the newer one I've been working on...is of course still being worked on. 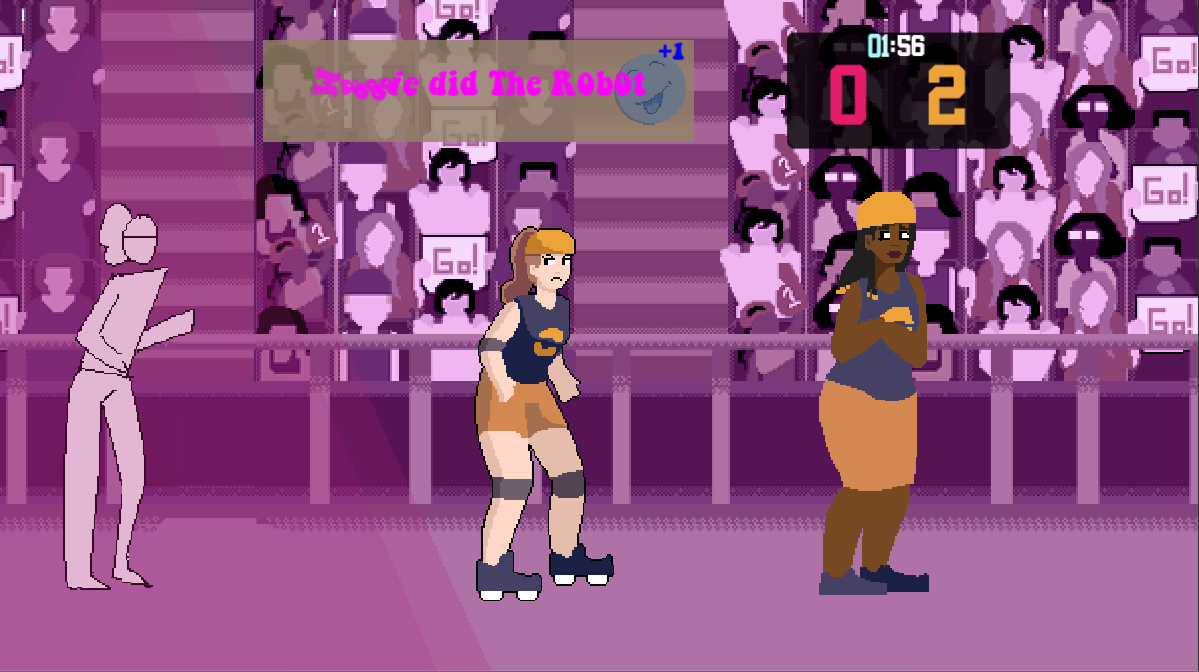 Here's one of the many screenshots I took today of what I have in there right now. Basically I took the derby simulation I've been working on and added the rhythm elements. I was experimenting with triggering moves via note type.
For instance if you keep hitting quarter notes it would be aggressive moves like with the initial push move in the current demo online.
Eight notes would activate bold moves allowing you to dodge and go faster and a mix of the two would cause cool moves ( which are dance moves) like the one in the screenshot.
The faces that are there represent the stat type and are also associated with a color. Aggressive is red, Bold is yellow, cool is blue.

There's also a changing disco light on Maggie that changes to the beat of the song that was suggested by one of my friends c: 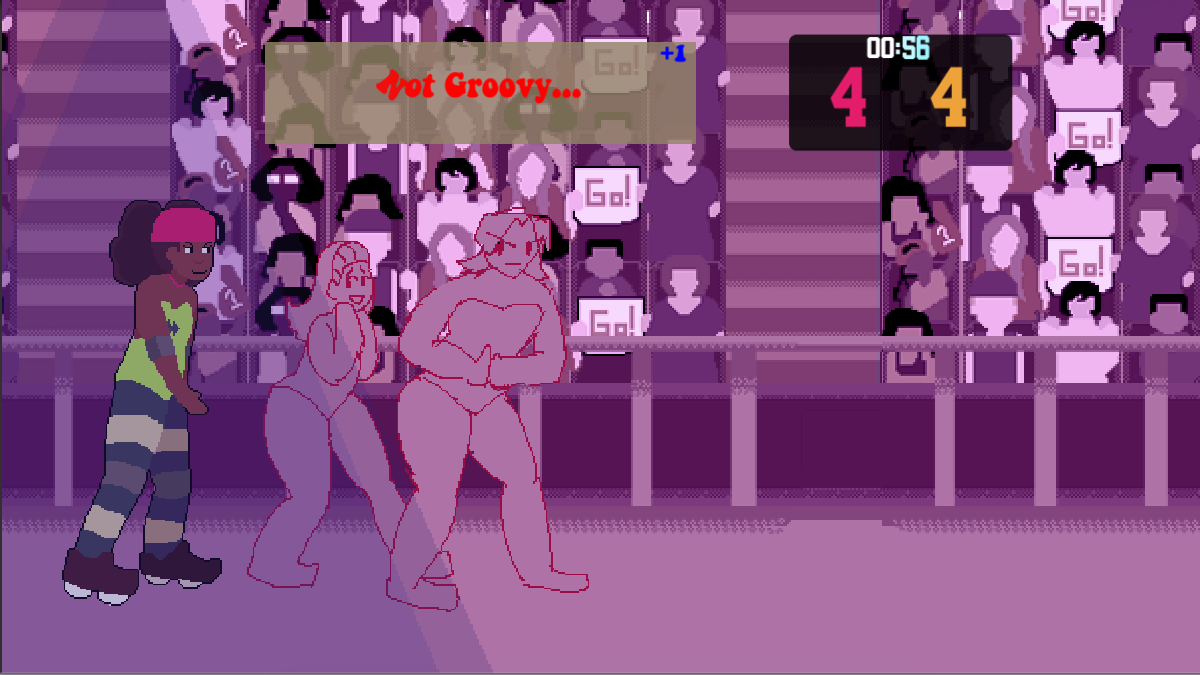 ALL of the derby members are also on the field even though they're roughly animated. Here you can see Emma(closest to Maggie) and Val blend more into the background which is because they're not your enemies. They're interacting with the alternate jammer on there own with stats attached to every character helping for that simulation to work. 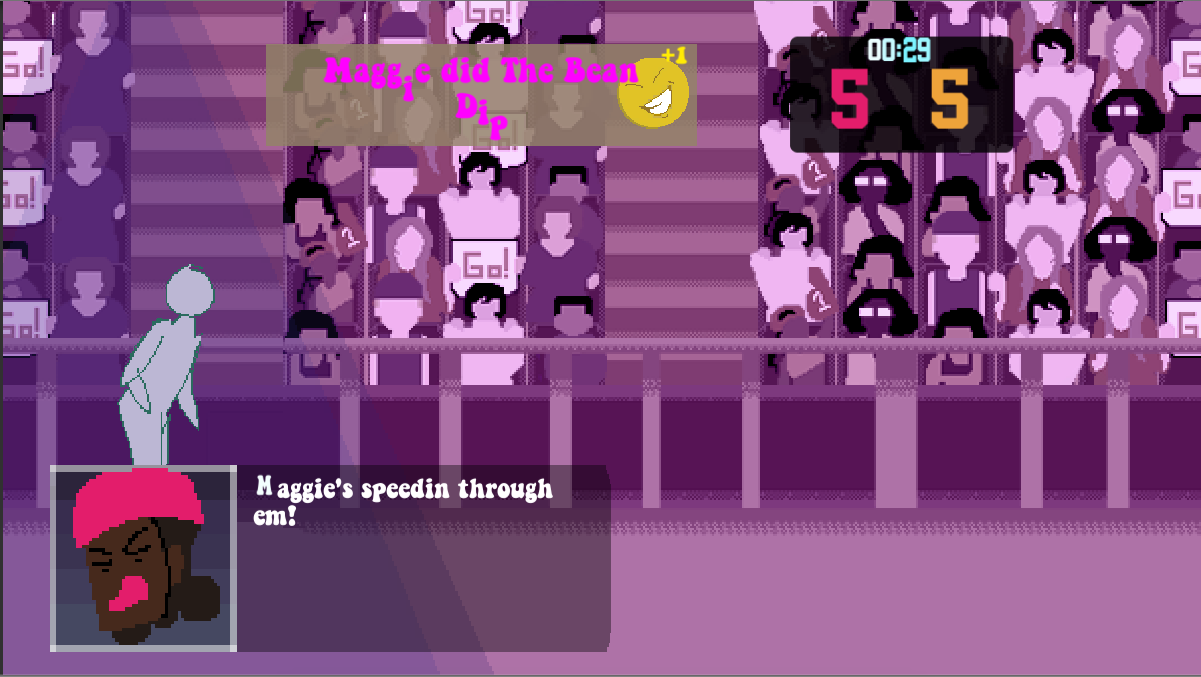 Another nice thing I wanted to show is how depending on what happens in the game now members can comment on it.  It's like my favorite thing since all the text is animated now and the text for THAT specifically!!! My favorite thing.
( At the VERY bottom you can see it but the game as it is right now is VERY broken)

Now you may be wondering " Gee Geneva if you spent 100+ hours and have all these screenshots and stuff why did this new build not come out?"

1. It's pretty broken!! Most of the week prior I've been trying to get this whole beat thing working so it's like the beats are there and coming to the meter next to Maggie but it's up to the player to hit it. When trying to implement it, it just kept breaking and breaking and BREAKING!!
Driving me nuts!! Even if I got it to work with the derby simulation I feel like players would just mash the buttons cause they see a beat coming. That's not what I want.

2 It doesn't feel just right. There may be the disco lights but there's no visual beats to guide the player. The blockers aren't coming on beat anymore. A lot of the rhythm doing is up to the player and although I DO want people to make their own beats I want to make it easy and understandable. The way it is right now is kinda confusing to grasp.

So what I'm going to do now is take a step back. Pull out the rhythm stuff and get everything else working. Like the animations because I was putting them in last minute for GDoCExpo and ended up messing up. A Lot.
( S/o to everyone who came to play yesterday!! I really appreciated it!)

I'll be updating stuff weekly on Twitter and trying my best to remember to post on Tumblr.
For now, here's a video ( with no sound unfortunately) of the gameplay.

Aha, I love that text effect!