Hey y'all long time no see!
I've been working hard on Skate and Date and I'm excited to say that the next devlog will include a very special announcement along with the demo!!
But for now I'm just gonna talk about what's changed/ improved since last time!

FIRST OF ALL!!!
Here's the first playable song in the game!!
https://soundcloud.com/gensuta/questionable-beginnings-skate-and-date-ost

Observe. Layout#9 The final layout for the demo ( I think) 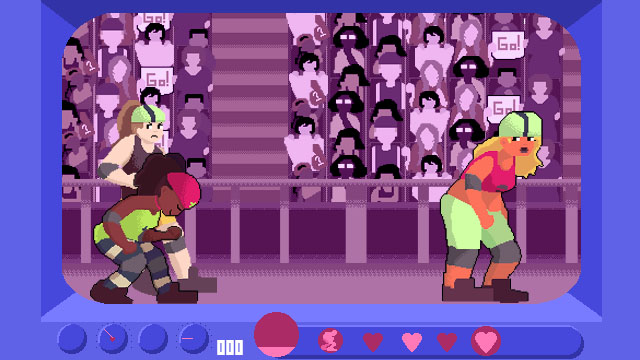 So I'm sure you're wondering what the heck is going on and like I'm looking at the last devlog and...
1. it was lengthy and
2. it had the first quick mockup of the game
So I'll try not to make this TOO lengthy.

The basic gameplay will be for the player to hit the beats within the circles when it reaches the meter. Meaning the one with the light colored heart and the one with the person in a circle are beats that will increase your score.
Your goal is to fill the meter, but you don't have to do that since your actions will affect the story.

Lost the level? No problem! It'll just appear in the story.
Purposefully missed hitting the beats Patricia were on? Also no problem! Because she'll say something about it.
But it'll be different  depending on what you do during the rhythm game. 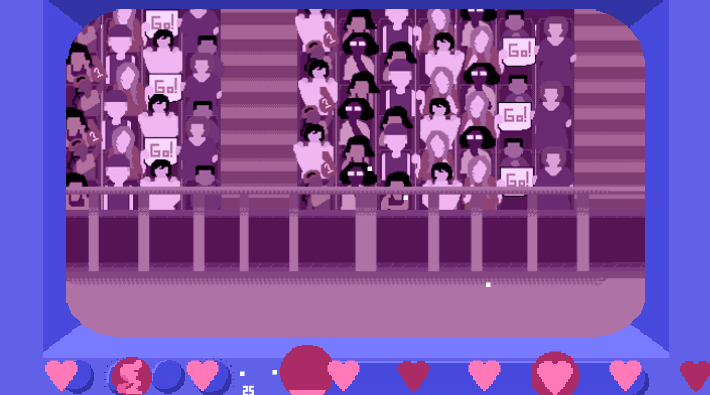 Currently in Unity I have the rhythm game working and this is what it looks like so far ( I haven't added the TV animations in yet, as in like Maggie and etc. skating n stuff)

The smaller hearts allows your score to boost more.
The dark hearts are the quarter notes. Like the (1-2-3-4) while the light hearts are the and beats think of ( 1 and 2 and 3 and 4 and)
Those little white dots burst out every time you hit the beat on the meter.
If you played the Yuri Jam ver. it still has the "Good!", Far Out!", and "Stale!" stuff.

For those who haven't you create your own beats with this game.
If you just hit the beats you need to you'll do ok but if you hit those smaller hearts you'll do better.
But specifically with stale, if you keep doing the same beat over and over your score will go down.
So like if you just mash the keyboard the whole time it ain't gonna work.

My next steps are to get the animator to work for me in Unity so that what you do below mirrors in the TV.
I also need to work in the narrative part as well as the tutorial.

By Saturday I'll have those ready to go since I'm going to be at Fanfaire!! ( a convention conveniently happening at my school in Manhattan)
I'm also moderating two panels focused on games which is pretty exciting!!

But anyway if you're in NY and happen to go to Fanfaire this weekend I'll be at table 402 selling stuff and letting people playtest my game!
( If you playtest it and answer a couple questions you get a free sticker!! ;) )

Annnd yeah I think that's it.

Till next time! Have a good rest of your week and enjoy this animation of Maggie I  managed to finish! C: