Happy New Year Everyone!! Can't believe it's been 5 fricken months since I started this and it's gonna be many months more till I actually finish it.

I did originally want it done by this January, but that would mean rushing this. I don't want to do that with this game since like I love rhythm games and sure this may be my first one, but I want to polish it so it's absolutely perfect. I even have an extra something special planned for it which I will announce soon.

But anyway on to what I've been working on since the last devlog!!

I've changed the mechanics like twice now >-> Mainly because I want this to be a good rhythm game. I've played bad rhythm games before so I can tell the difference between what's fun and what isn't and furthermore just the feedback I got from friends let me know my rushed game jam ver. of it is ehhhh.

The first time I changed the gameplay I made certain beats MANDATORY to hit so like you'd see the enemy first with a beat number over their head for the first measure and for the second measure you'd make your beat. The types of beats you can make aren't limited anymore since I found an efficient system to like give you higher scores, but I got rid of the mechanic of effecting Maggie's personality because eh. I don't want the narrative portion to necessarily be a visual novel and I also don't want it to be the type of gameplay where you walk around and talk to people soooo that stuff is out the window.
I did learn a lot though from when creating this second prototype.

For what I'm doing now is sort of the same except I still want the rhythm game to affect the narrative!! So when you play the game Patricia will be a jammer on the opposite team. When she's around you can interact to affect her opinion of you. ( As in like you can do a swiftly go past her or dodge all blockers nearby orr not pass by anyone?) 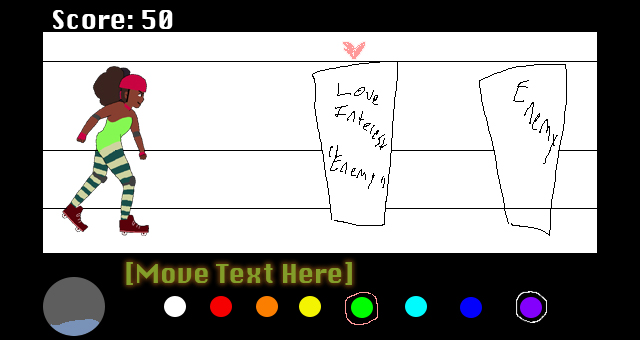 This is a very quickly made rough layout of what it'll be like >0> and no I'm not using the Spriter Pro animations of Maggie.

The circles below are the beats and the circle with another circle surrounding it are beats that will boost your score more allowing your "meter" to increase. I don't know what to call the circle that'll fill up on the left yet but lets call it the meter for now.

Today I gathered so much animation reference as in like, stopping and starting videos of roller derby and taking screenshots to analyze them and I'm just exhausted from that as well as doing more concept art for Skate and Date.

Last but not least I'm fleshing out Maggie and Patricia's story more!!! In the "Demo" (let's be honest, it's a prototype)  it was so short because I was so focused on the rhythm portion and struggling with it that I barely got to work on their story :/ which sucks.

But anyway! A new demo should be out by the next month or two along with more devlogs! Stay tuned ;)